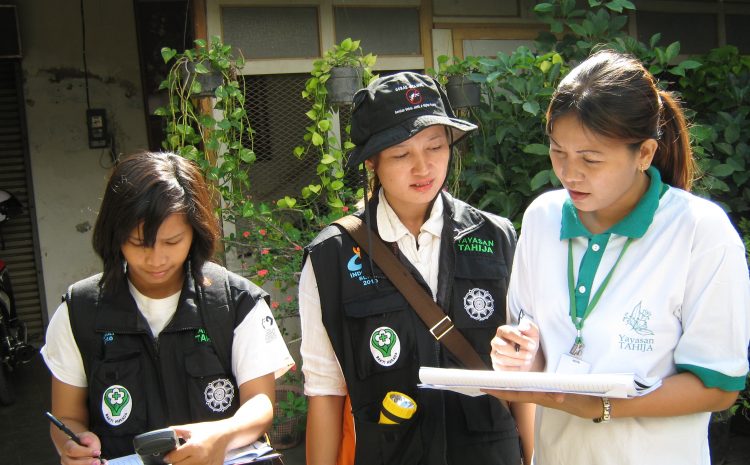 In 2004, the Tahija Foundation initiated and launched a research and pilot project to help find a solution to the DengueHemorrhagic Fever (DHF) issue. The research was implemented in Yogyakarta in three stages since 2004 and was concluded at the end of 2010.The research was done in collaboration with the Atlanta (US) based CDC Foundation and the Faculty of Medicine of the Gadjah Mada University and received full support of the government and the people of the City of Yogyakarta.

This research was conducted to test the hypothesis that control of dengue using targeted intervention on primary breeding containers (in this research they were identified as bathroom water containers/bak mandi, household water containers/bak air, and residential wells) will effectivelysuppresstransmission of dengue. The research used a larvaside which is an artificial hormone that affects metamorphosis (insect growth regulator), pyriproxifen Sumilarv®.

The results of the second phase however were not as expected. The method of targeted intervention was able to control the number of larvae or pupae of Aedes aegypti in targeted breeding containers but statistically the results were not clearly evident on reduction of adult mosquito population. The results were not convincing enough to claim a reduction in the number of cases of morbidity cases of dengue in Yogyakarta City as a result of interventions conducted by field officer in collaboration with the community.

Dengue control evidently cannot rely on a single intervention method but should be done through a concerted application of several control methods.

The six-year experience in the first Dengue Project has provided us with invaluable lessons. Most importantly, in line with the character of the Tahija Foundation, as a venture philanthropy institution is the desire to keep experimenting and recognizing defeats as a way to ‘try new approaches’. Going forward with a new approach, in September 2011the Tahija Foundation agreed to collaborate with Monash University, Melbourne, Australia to conduct a research to block the transmission of the dengue virus in Yogyakarta by using biological control methods namely the use of the Wolbachia bacteria.