For the Tahija foundation, the leaves and flowerets of the Tahija cinnamon tree represent the foundation’s core values: empathy, equality, pluralism.

The logo of the foundation depicts leaves and flowerets of the Cinnamomum tahijanum Koster, which is a native cinnamon tree first discovered in Borneo and described in 1970 by Dr. A.J.G.H Kostermans, dedicated to Julius and Jean Tahija thus; “…this beautiful tree is named in honour of Mr. Julius Tahija, Chairman Managing Board of the PT Caltex Pacific Indonesia, Jakarta, who donated a substantial sum to the Herbarium Bogoriense, Bogor, for the preservation of the material, deposited in that worldwide known Institute and whose wife is immensely interested in plants and in maintaining a beautiful garden upcountry off Bogor.” 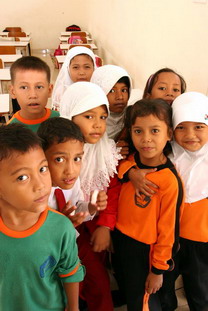 To bring about a better Indonesia through partnership for sustainable initiatives in education, culture, health, environmental conservation and social services